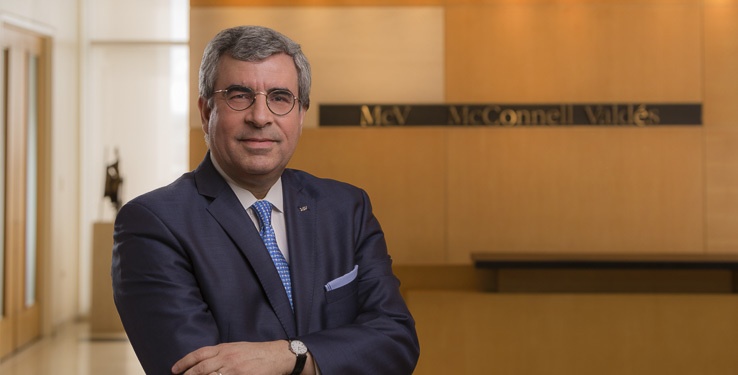 He has developed a general civil and commercial litigation practice with emphasis in insurance litigation, franchise and distribution laws, constitutional law, contractual disputes, and trusts and estates litigation. He also has significant experience in government and legislative affairs, municipal financing, and has dealt with many bankruptcy matters.

Mr. García-Solá is ranked as one of Puerto Rico’s Leading Attorneys in the Dispute Resolution field by the renowned international publication Chambers & Partners in both its Global and its Latin America Guides. He is also ranked in the Arbitration and Mediation field of The Best Lawyers in Puerto Rico guide.

As a litigator, he practices extensively before the federal courts, both at trial and appellate levels, and the United States Supreme Court.

Mr. García-Solá has argued three times before the Supreme Court of Puerto Rico, the highest court in Puerto Rico which allows oral arguments only in few cases of significant public interest, such as Watchtower Bible Tract Society of New York, Inc. v. Santa Isabel, Civil No. 04-1452(GAG), where Mr. García-Solá made an oral argument as Amicus Curiae on behalf of three hospitality industry clients in a certification to the Puerto Rico Supreme Court made by the United States District Court for the District of Puerto Rico.  In this case, the District Court certified to the Puerto Rico Supreme Court the question of whether private roads are permitted under Puerto Rico law.   He has also appeared many times before the United States Court of Appeals for the First Circuit.

His litigation practice has ranged from handling complex settlement negotiations to leading the litigation strategy in administrative proceedings before Puerto Rico’s Department of the Treasury.

His recent cases include representing AmeriNat, the largest single creditor in the Title III proceeding for the Puerto Rico Highways and Transportation Authority and a significant creditor in the Title III case of the Commonwealth of Puerto Rico, and acting as lead counsel in two complex Consent Decree litigations: one representing the Puerto Rico Police Bureau and the other representing the Commonwealth of Puerto Rico, and particularly its Division for Services for Adults with Intellectual and Developmental Disabilities, concerning allegations of violations of civil and constitutional rights.

In 2008, he participated as counsel for Governor Luis Fortuño’s Transition Committee and was a member of Governor Fortuño's Talent Selection Committee.

He initiated his career clerking for the Hon. Juan M. Pérez-Giménez, then Chief Judge of the United States District Court for the District of Puerto Rico, from September 1983 until October 1985, when he joined the Firm's Litigation Practice Group.

Mr. García-Solá served as President of the Federal Bar Association's Puerto Rico Chapter in 2001. He has served as member of various Merit Selection Panels that assisted the United States District Court for the District of Puerto Rico in selecting magistrate judges for the court. He has also been a member of the First Circuit Judicial Conference Planning Committee.

The diversity of Mr. García Solá’s practice is evident in the variety of litigation and government affairs matters he undertakes for his clients:

Fellow of the Foundation of the Federal Bar Association